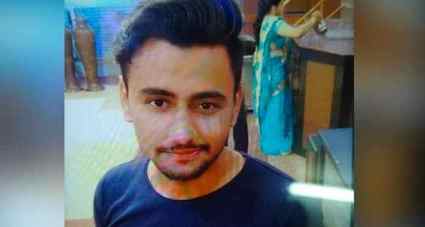 INDIA NEWS – The paramilitary forces and Delhi Police personnel are stationed at the rear of the Raja Park Police Station in Mangolpuri area of ​​Delhi. The youth are carrying saffron flags in their hands, shouting slogans and moving towards the platform at the intersection. A tribute meeting of 25-year-old Rinku Sharma, who died in a knife attack on 10 February, is being held here. Rinku’s family and officials of Hinduist organizations sit on the stage. Leaders of Delhi BJP are also among them.

The case of Rinku Sharma’s murder has been on social media for the last several days. The Delhi Police has said that there is no communal angle but personal dispute behind the murder, but Rinku’s family and the people present in the tribute meeting are not ready to accept it. He says that Rinku is murdered by Muslim youths for raising the slogan of Jayshree Ram. In this tribute meeting, the long road widens for the ever increasing crowd. As far as Delhi Police’s drone camera is being seen, people are visible. There are provocative slogans. At this tribute meeting on Sunday, words like anger, vengeance, revenge, punishment, hanging were heard again and again.

Put the cap of Jai Shri Ram on the head, holding the saffron flag in hand, Kuldeep Pal has come from Noida. They are also broadcasting live videos on social media from their smartphones. Kuldeep asks a youth, why Rinku was killed, the youth replies, “Our brother chants Jai Shri Ram’s slogan, then the jihadis kill him.” Kuldeep is accompanied by his wife and children, who are holding posters. It is written on the poster, ‘I too raise the slogan of Jai Shri Ram, will you kill me tomorrow too?’

Kuldeep says, “I came to know from the news that one of our brothers has been killed by the jihadists only for raising the slogan of Jai Shri Ram.” I have not come on the call of Bajrang Dal or any organization. I have come to raise my voice for my Hindu brother so that it does not happen again. ‘ People are talking about Hindu unity and awareness even in the nearby streets. The women sitting in a group are saying, ‘It would not have happened if everyone had been together already.’

Rinku’s house is in street number four. A heavy police force is stationed here. A metal detector has been installed on the way and the police is allowing it to go ahead only after investigation. Rinku’s father Ajay Sharma is sleeping in a blanket in a one-room house. He has recently been diagnosed with his blood pressure disease. Remembering that night of 10 February, he says, ‘My son went to the birthday that day.

We were sleeping at home. He came stuttering. Those people came back with sticks and sticks. My son also lifted the cylinder. He ran outside, I tried to stop. Who would I stop? ‘ When Rinku went outside, we locked the door from inside. They stabbed him right there. When he came home, he had stabbed in the waist. The bloodstream was flowing. We immediately took him to Sanjay Gandhi Hospital. Sanjay Gandhi Hospital is barely two hundred meters away from here. A badly injured Rinku succumbed here.

There are still blood stains in front of Rinku’s house. Most people living here say, “Rinku was shouting slogans of Jai Shri Ram while going to the hospital.” Rinku’s father missed a job ten months ago. Rinku, who was a lab technician in a private hospital, was the only earning member of the family. His family of five sleeps in the same room.

The Muslim family of five brothers is accused of assaulting Rinku. One of these houses is only twenty steps away from Rinku’s house. There is no one in this house now. The mob has broken its doors. According to local people, one of the attackers is a police informer and is of criminal nature. He also has influence here. Most of the houses here are of Hindus. The houses of Muslims are few which are now locked.