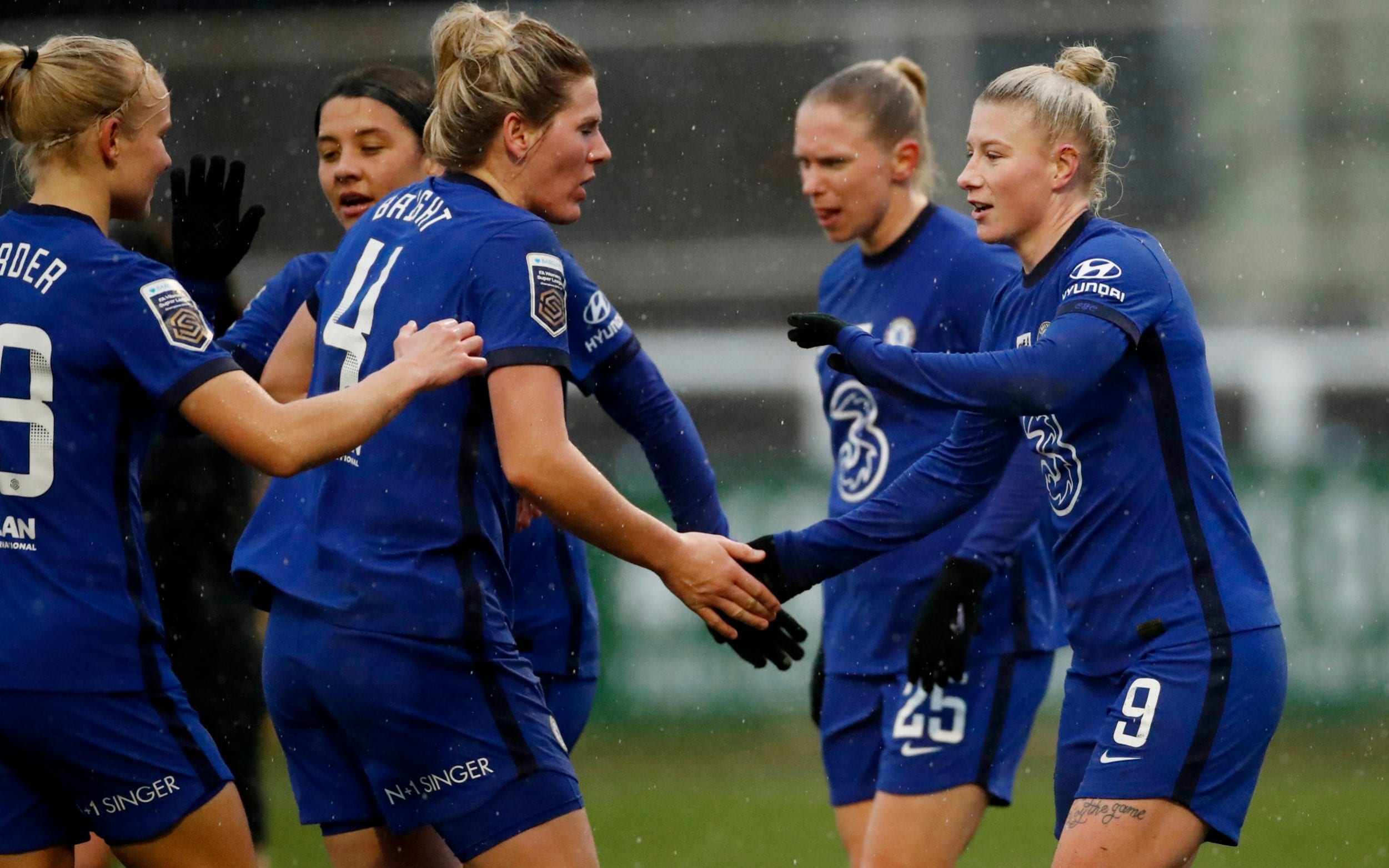 It’s not often that a manager can claim that their team could have been “7 or 8-0 up at half-time” and not be exaggerating, but such was the intensity of Chelsea’s early bombardment of the Bristol City penalty area.

Indeed, it was hard to say which was more relentless: the persistent pounding of heavy rain at a sodden Twerton Park in the second half, or Chelsea’s constant pressure in the first.

As the Bristol City players traipsed off at full-time, drenched, they had battled hard to keep the scoreline down to merely 5-0, against a Chelsea team who extended their league at the top of the Women’s Super League to five points, having played a game more than second-placed Manchester City.

Emma Hayes’ side began the game looking like a team in a hurry. Denmark’s Pernille Harder seemed certain to score inside a minute but was denied by a good save from the feet of Sophie Baggaley. Within moments, Magdalena Eriksson had fizzed an effort just beyond the top corner, Baggaley saved again from Jonna Andersson and Ji so-Yun and Fran Kirby had both fired narrowly off target. That was the first four minutes.

When the deadlock was inevitably broken it was Kirby who scored, flicking in at the near post from a corner. Sam Kerr also headed just wide and Kirby was denied by a fine block from Gemma Evans, as the onslaught from the visitors continued.

Well struck, close-range finishes from first Harder and then Kirby extended their advantage to 3-0 before the break, before Kerr’s expert leap and downward header from Bethany England’s left-wing cross added the fourth 10 minutes after half-time.

England had started up front alongside Kerr as Hayes used a more attacking formation than the 4-2-3-1 that has often seen only one of those two star strikers start, and that paid off, with England producing one of her best displays of the campaign and bundling in the fifth goal on the hour.

“Beth is getting back her to best levels,” said Hayes. “It’s taken her a while this season but this [display] is what I expect from Beth. She’s taken on all the feedback about what she has to do to get to the next step and I want to say I’m proud of her today.”

The result gave Chelsea a second win in five days without conceding, having beaten Arsenal 3-0 on Wednesday, since their shock defeat against Brighton. Chelsea had chosen to rest several key players against Brighton but were at full-strength on Sunday.

“We came out of the blocks really well,” Hayes said. “The first-half performance was outstanding, with the way we moved the ball. The pitch was wet, it was difficult, but our one and two-touch play was as good as I’ve seen it. We could have come in 7 or 8-0 at half-time. That’s probably the most disappointing part of the game, we weren’t as clinical as we should be, [but] we’re really starting to find our stride.”

Bottom-of-the-table Bristol City’s best moment came when Ebony Salmon fired over from close range, as they created little, but their interim boss Matt Beard knows these games against title contenders will “not define their season”, adding: “I definitely think we can stay up, I’ve seen enough from the group. We have to make sure that, in the games that really, really count, we’re picking up points.

“I’m not saying I totally write these games off – we wanted to have a go and get something of the game, but I have to be realistic, to know where Chelsea are and where we are. We have to stick together and we know the games we need to win.”