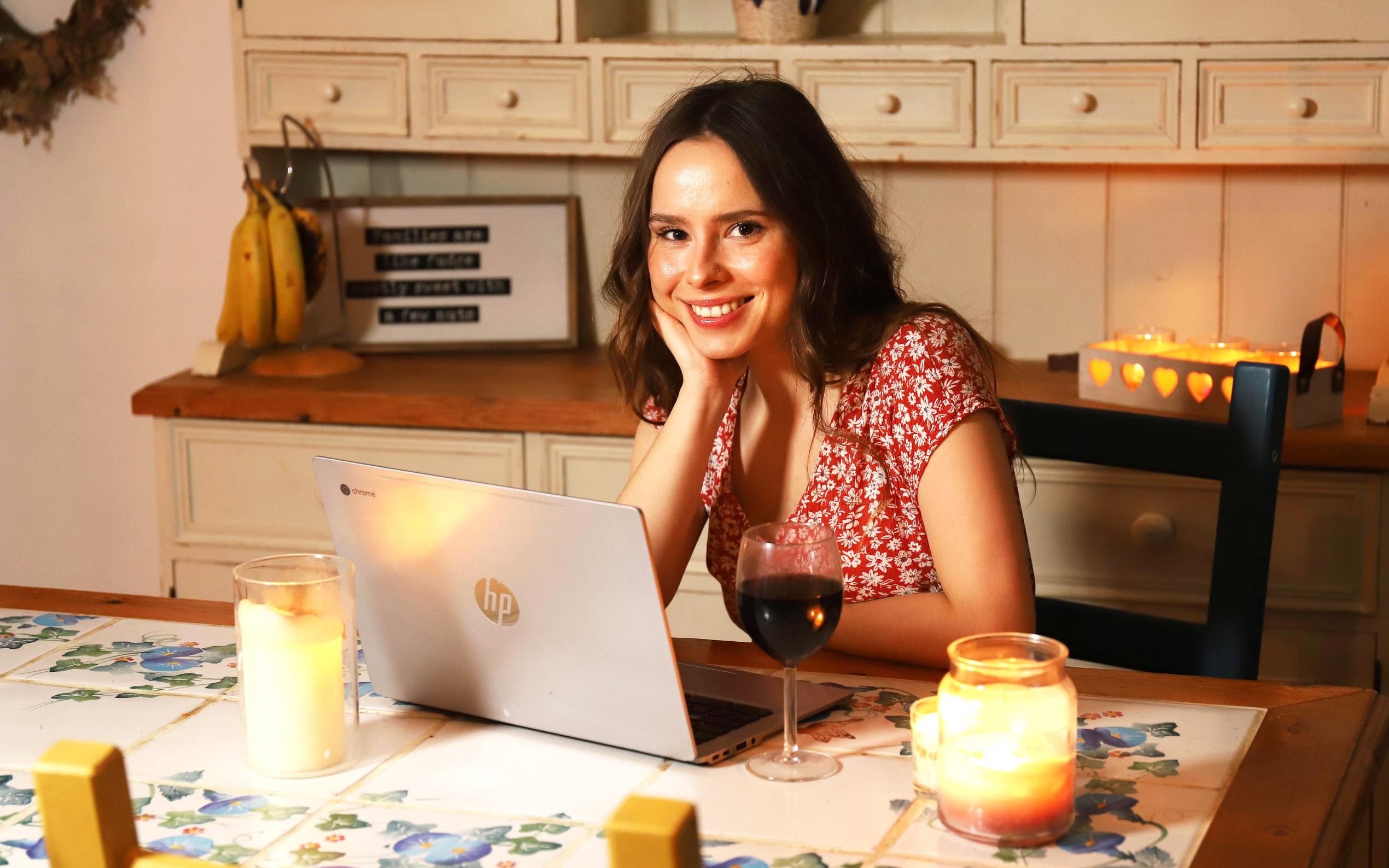 Ellie Stevens, a 24-year-old graduate, could barely contain her excitement. It was December and she was preparing for a date with Daniel, a 33-year-old financial analyst and veritable hunk (if his profile picture was anything to go by).

The pair matched on a dating app while both living in Berkshire, and, after a few weeks of near-constant texting, she felt confident they’d have a connection in person. Eventually, the date was set: new heels were ordered; the restaurant was booked. She was counting the days. But before they had the chance to meet, the second national lockdown was announced. Annoyed but undeterred, Daniel popped the question: “Will you go on a virtual date with me?”

It wasn’t the original plan, but Stevens was looking forward to it. “I live with two housemates, so I prepared for the date in my room,” she admits. “Part of me was relieved that I wouldn’t have to dress up (I wore slippers) and take the bus to the town centre.” Wine in hand, she opened her laptop and waited for sparks to fly; however, things didn’t go as expected.

The virtual date was awkward and dull. The chemistry between the pair that had grown over text fell flat when translated to video. After a stilted hour of “so, this is weird” and “what did you eat today” small talk, she hung up the video call, feeling short-changed.

Stevens’s experience is not uncommon among singles who have opted to date virtually during the pandemic. Cast an eye over Refund My S— Date, a platform set up in December by dating app Inner Circle, and you’ll find hundreds of similar stories from anonymous singletons in the online dating sphere.

One user recalls a Zoom date with man who called himself “Sunshine Dave”. “He wore sunglasses and a large hat so I couldn’t see his face,” she wrote. “He wasn’t like his texting self. I pulled the plug once he put on a Rastafarian accent and started insulting me.”

While reading stories like this, I shuddered at the thought of my own brush with virtual dating: an awkward one-hour Zoom session with a handsome but misunderstood art teacher, who, in the first 50 minutes, escaped for a cigarette break, drank one and a half bottles of wine and told me off for daring to ask about his family.

We’d only been texting on a dating app for a few weeks, but it was hard not to fantasise beforehand – could this floppy-haired, book-loving, parka-wearing man be relationship material? He wasn’t, alas, and even though I knew I’d saved money on transport, an outfit and dinner, the unsuccessful date somehow felt harder to take when sitting alone in my bedroom.

It was clear that many essential elements of a real-life first date – the buzz of a busy restaurant or bar, the noise, the music, the distractions of food and people, the nervous laughter, the accidental brush of an arm or leg – imperceptible things that can mask awkward moments or cushion the blow if things are going badly, were missing.

There was just our conversation and a face on a screen, and not a lot else. And when it ended, there was no long goodbye; we both just closed our laptops.

Stevens felt the same way; she logged off feeling deflated when her date floundered. The lack of connection left her wondering: why was the bond she’d developed with Daniel, one that got her through weeks of isolation, unable to stand up to a video call? With so many stories echoing the same sentiment, I needed guidance.

Online dating – and the very 2020/2021 phenomenon of video dating, has made meeting others easier, but it has its challenges too, says media and business psychologist Charlotte Armitage.

“In person, we rely on subconscious communication to establish how we feel about someone. One might describe it as the ‘gut feeling’: when something may inexplicably feel wrong or right,” she says. “In the online domain, we can no longer count on these instinctive abilities to assess the situation. As a consequence, it can be harder to have deep communication, which makes it difficult to ascertain whether or not there is a connection with the person you’re dating.”

Another challenge of video dating is that we are hyper-aware of being watched, and of our own facial expressions. “Most video calling platforms will include the user’s own camera view on the screen,” said Dr Linda Kaye, a lecturer in psychology and cyber-psychology expert, in an article for Psychreg. “This enhances our self-awareness, resulting in us making additional self-presentation efforts.”

Not only does video calling require a sustained attention to words instead of body language, in a dating context, it can cut off cues we’d ordinarily rely on to judge character (dating “red flags” to you and me). On video, we’re framed from the shoulders up, meaning that hand gestures and posture are obscured. Likewise, a dodgy internet connection can disrupt conversation.

In 2014, a study headed by Dr Katrin Schoenenberg of T-Labs in Berlin, revealed that delays in conferencing technology shaped our views of people negatively; delays of just 1.2 seconds made people perceive the responder as less friendly or focused.

Add in the inability to correctly judge the length of a pause between speakers, and every Zoom discussion runs the risk of becoming group “monologuing” (a term used by Ashley Fetters in The Atlantic) rather than a naturally flowing conversation with frequent interjections.

All of which suggests anyone who is single is likely to be gripped by despair. On the contrary, according to a survey by Inner Circle, 86 per cent of people hope to have a better dating experience in 2021, and 83 per cent are now looking for a more serious relationship. The pandemic – and video dating – haven’t killed dating by any means.

For many, living alone during the pandemic has been a challenge. Without after-work drinks and gatherings, singletons are now facing several more months of solitude. “People who didn’t previously think themselves ready for a relationship are now considering settling down,” says Charly Lester, a dating expert for Inner Circle.

And video dating, she adds, is a great way to vet partners and find out what you really want. “You might think you’re looking for a guy who is 6ft 6in, but that won’t matter when he’s sitting behind a computer screen.”

It’s certainly true that more people are sampling this type of dating. In April 2020, dating website Match.com polled over 6,000 members to see how the pandemic had affected their dating habits. Video chatting, favoured by just 6 per cent of singles before Covid-19, was now used by 69 per cent.

Thousands of women and men are still keen to meet the one by any means necessary, even if it requires enduring a few awkward moments. As for me, I will happily admit that, despite my brush with the bristly art teacher, I am still on the search for love. In fact, I’ve just organised a date for next week. Fingers crossed it goes a little better…

How to make the most out of a virtual date