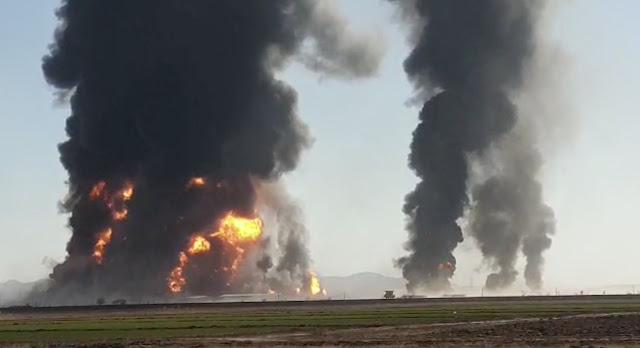 Tehran News – 500 trucks were burnt down in a fuel tanker explosion on Saturday at the Islam Kala intersection in Afghanistan’s western Herat province on the Iranian border. According to information provided by Afghan officials and Iranian government media, 7 people were also reported to have been burnt in the incident. Officials said the fuel tanker caught fire following an explosion that burned more than 500 trucks carrying natural gas and fuel. The flames are so strong that there is a lot of difficulty even in the rescue work.

‘The cause of the explosion is not known

Giving information about the incident, Herat provincial governor Wahid Katali said that it was not immediately known what was the cause of the explosion in the Fue tanker. “At the moment, we cannot talk about the casualties,” he said. Herat Regional Hospital spokesman Mohammed Rafiq Shirji said that due to the intense flames, the ambulance was having trouble reaching the injured or approaching the blast site. . He said that 7 people have been admitted to the hospital in Herat till now.

It is dangerous to travel on this road at night

The spokesman of the Ministry of Power Supply, Wahidullah Tahidi, said that due to this incident Afghanistan has had to shut down its power supply from Iran. Iran’s semi-government news agency, Irna, quoted truck drivers as saying that more than 500 trucks carrying natural gas and fuel have been burnt so far. The route between Herat and Islam art is considered quite dangerous and Afghans generally do not travel at night from this highway. Actually, on the one hand there is a risk of attack by criminal gangs, on the other hand, Taliban fighters also roam freely.