Amazon.com Inc. breached the $1 billion-a-day revenue mark in 2020, in another example of how the company’s massive growth and market dominance has made its stock a near-unanimous favorite on Wall Street.

The e-commerce giant’s fourth-quarter results brought full-year revenue to $386 billion. According to an analysis of Bloomberg data, Walmart Inc. is the only other U.S. company with a $1 billion daily sales average, though Exxon Mobil has hit it in the past.

Amazon’s massive haul reflects both the holiday shopping season and the pandemic, which accelerated a longstanding shift to online retail over last year. As a measure of how the company is thriving in this environment, revenue grew nearly 44% in the fourth quarter, topping $100 billion for the first time; it also guided toward another quarter above that level.

The stock dipped 0.3% to trade around $3,370 on Wednesday, with the results offset by the news that Chief Executive Officer Jeff Bezos will be stepping down from his post later this year. Amazon’s shares have gained nearly 70% over the past 12 months.

While Walmart has consistently reported revenue above the $100 billion threshold for years, it is only expected to report revenue growth of about 4.5% when it reports later this month, according to data compiled by Bloomberg.

“The growth Amazon is seeing is just amazing, and it reflects a structural shift toward e-commerce that isn’t stopping or slowing,” said David Wagner, a portfolio manager at Aptus Capital Advisors, which owns the stock. In a phone interview, he added that “as this tailwind continues, Amazon will become even more of a behemoth than it already is, and not just in e-commerce, but retail overall.” 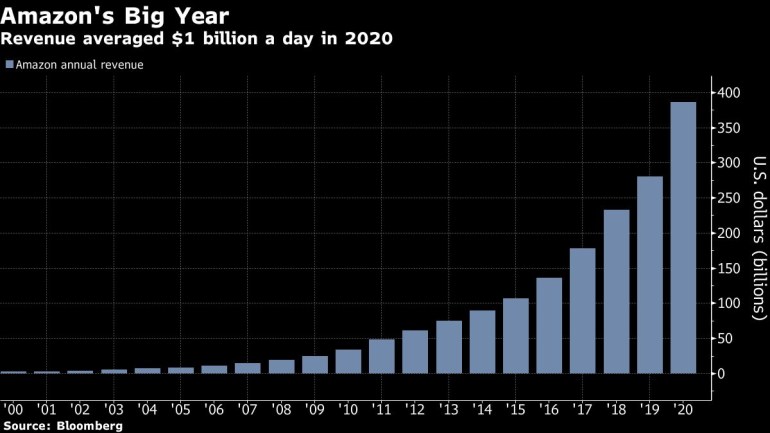 Among S&P 500 companies with at least $50 billion in annual revenue, only T-Mobile USA Inc. and Centene Corp. had growth above 40% in their most recent quarters, and both were boosted by recent acquisitions. In addition, Amazon is one of only six S&P 500 companies to report at least six consecutive quarters with revenue growth above 20%, along with Netflix Inc., Etsy Inc., Salesforce.com Inc., ServiceNow Inc. and DexCom Inc.

This kind of potential has made Amazon the best-loved megacap on Wall Street. According to data compiled by Bloomberg, 54 firms recommend buying the stock, compared with only one with a neutral rating. None have a bearish view, resulting in a consensus rating — a proxy for its ratio of buy, hold, and sell ratings — of 4.93 out of five, the highest among the largest U.S. companies. The average analyst price target implies additional upside of about 20%, above the return potential of names like Apple Inc., Alphabet Inc. and Microsoft Corp.

The company shows “no signs of slowing down after a huge holiday season,” and its leadership in key markets “should emerge even stronger coming out of the pandemic,” wrote Shyam Patil, an analyst at Susquehanna Financial Group. He sees the stock climbing to $5,200, the highest price target on the Street.