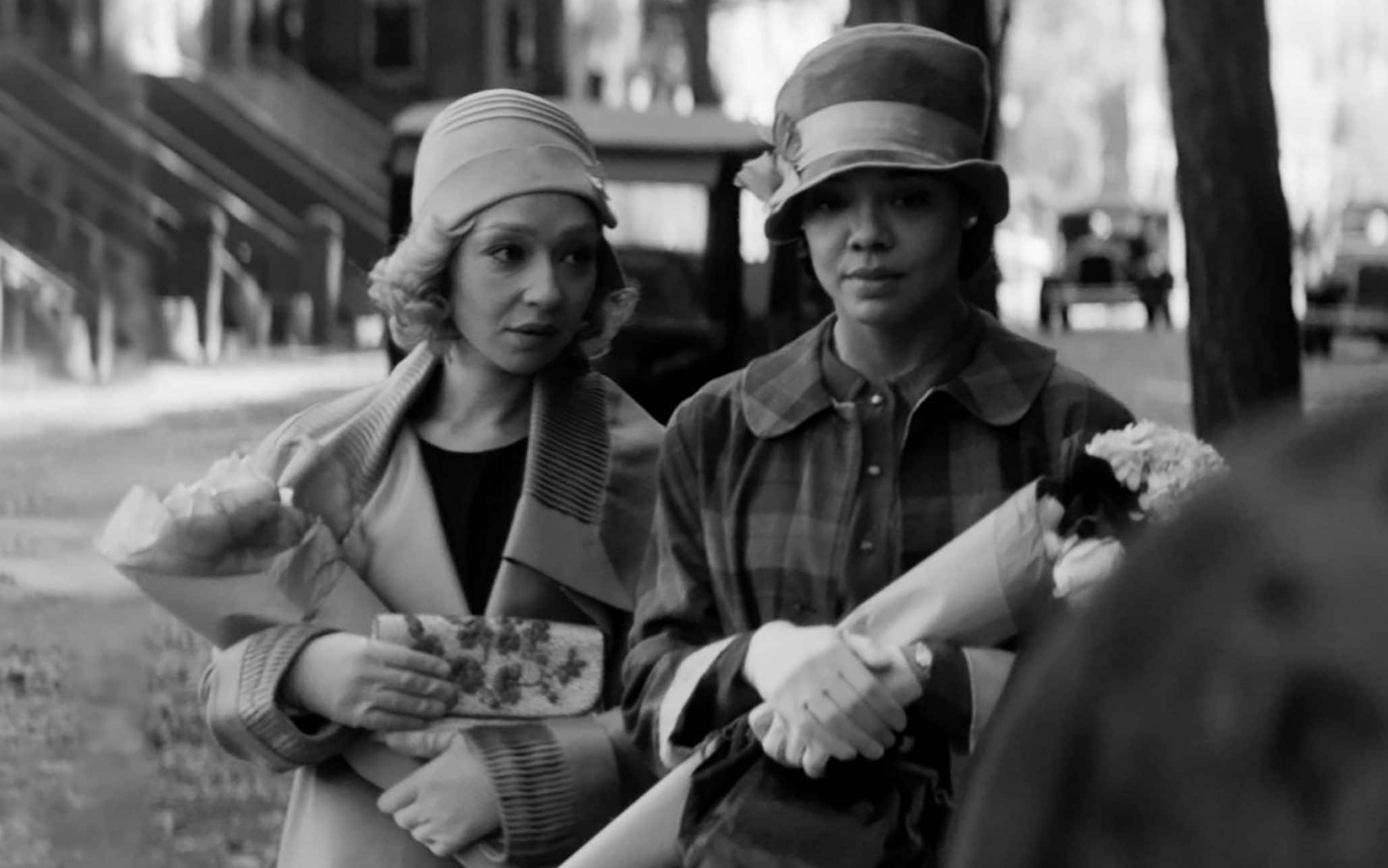 To describe Passing as a black-and-white film is to wrestle with the inadequacy of that very term. Based on Nella Larsen’s 1929 novella, Rebecca Hall’s exhilarating debut as a writer-director (which premiered at the Sundance Film Festival last night) is about a reunion between two black women during the Jazz Age. One of them has been passing as white, even fooling her racist white husband; the other is married with two boys and living in a well-to-do Harlem neighbourhood. These childhood friends sit on either side of a social divide that might as well be the Grand Canyon – opposites by choice, and yet sisters in their ethnicity and upbringing.

They are played, brilliantly, by Tessa Thompson and Ruth Negga, whose faces the camera scrutinises with a curiosity heightened in grayscale, and intensified in the 4:3 ratio of silent cinema. Alive to pulse-quickening details of body language and the conversational codes by which a dangerous friendship lives or dies, the film is a study in contrasts far beyond the monochromatic.

Almost every scene asks visual questions of its actresses, settings, even the lighting: it opens in bedazzling sunshine, with Irene (Thompson) mingling among the white customers in a New York toyshop. She uses the brim of her hat to avoid stares, but it’s the force of the sun that gives her cover. Retreating, ill at ease, to the cool of a hotel tea room, she doesn’t recognise the seeming white stranger who approaches her with an enigmatic smile.

With her blonde Carole Lombard hair and feline confidence, Clare (Negga) has believably sustained this ruse for many years, despite jokey comments from her husband Jack (Alexander Skarsgård) that she seems to have got darker ever since they married. The illusion she has weaved pulls Irene, on this one occasion only, into its sphere.

Jack assumes she’s also white, heedlessly drops the N-word within moments, and follows up by expressing his downright loathing for all black people. Irene can only laugh, near-uncontrollably, at the bitter irony, while Clare mutely gazes at her with a mixture of complicity, pleading and guilt, not untinged by envy, and also mischief, and a kind of triumph. There’s a lot going on in that look.

The whole phenomenon of “passing” has been one of cinema’s hidden histories, tackled as a social issue in rare melodramas such as Imitation of Life (1934) – featuring the light-skinned Fredi Washington in her most famous role – and Pinky (1949), with its white star, Jeanne Crain. But no one to date has ever adapted Passing, because Larsen’s point-of-view is the opposite of white patronage or weepy understanding. It’s a bitter, brave and astonishingly modern book.

Hall’s involvement might feel like an added mystery until you hear of her own biracial heritage. She’s famous as the daughter of the late theatre director Sir Peter Hall; what’s less well known is that her mother, the American opera singer Maria Ewing, had a mixed-race father who passed as white. She has sculpted this material with an instinctive sense of what makes the relationship between Irene and Clare so continually mesmerising. They share certain anxieties, like feeling more trapped than fulfilled by motherhood, but Tolstoy would have said that each is unhappy in her own particular way.

“I am satisfied,” Irene says out loud in bed, facing away from her husband Brian (André Holland) after a mild dispute. It comes out like an attempt to convince herself. Hall’s script, and Thompson’s detailed sense of Irene’s interior life, unearth a bisexual subtext, at the very least, from Larsen’s slender but cutting story. There are other histories of passing to contemplate here too.

Meanwhile, Clare quenches her thirst for black society by slipping in and out, an interloper and provocateur, while no one white (except Bill Camp’s seasoned scribe) is any the wiser. Negga, shimmering like a silent movie queen from head to toe, gives the character a tragic cunning you can hardly take your eyes off: I thrilled to this performance like nothing else I’ve seen her do.

While Jack’s away, Clare makes risky dalliances to Harlem nightspots where she poses as a tourist, but turns every head in fascination, and knows it. Irene won’t dance, but watches her friend bewitch her way from partner to partner, until even Brian seems besotted. Jealousy and sadness flow back and forth, along with an acute awareness of how other lives can cast yours into shadow. I devoured the book as soon as I’d watched it, and Hall’s imaginative achievement only grew in the process. It’s a marvellously suggestive piece.