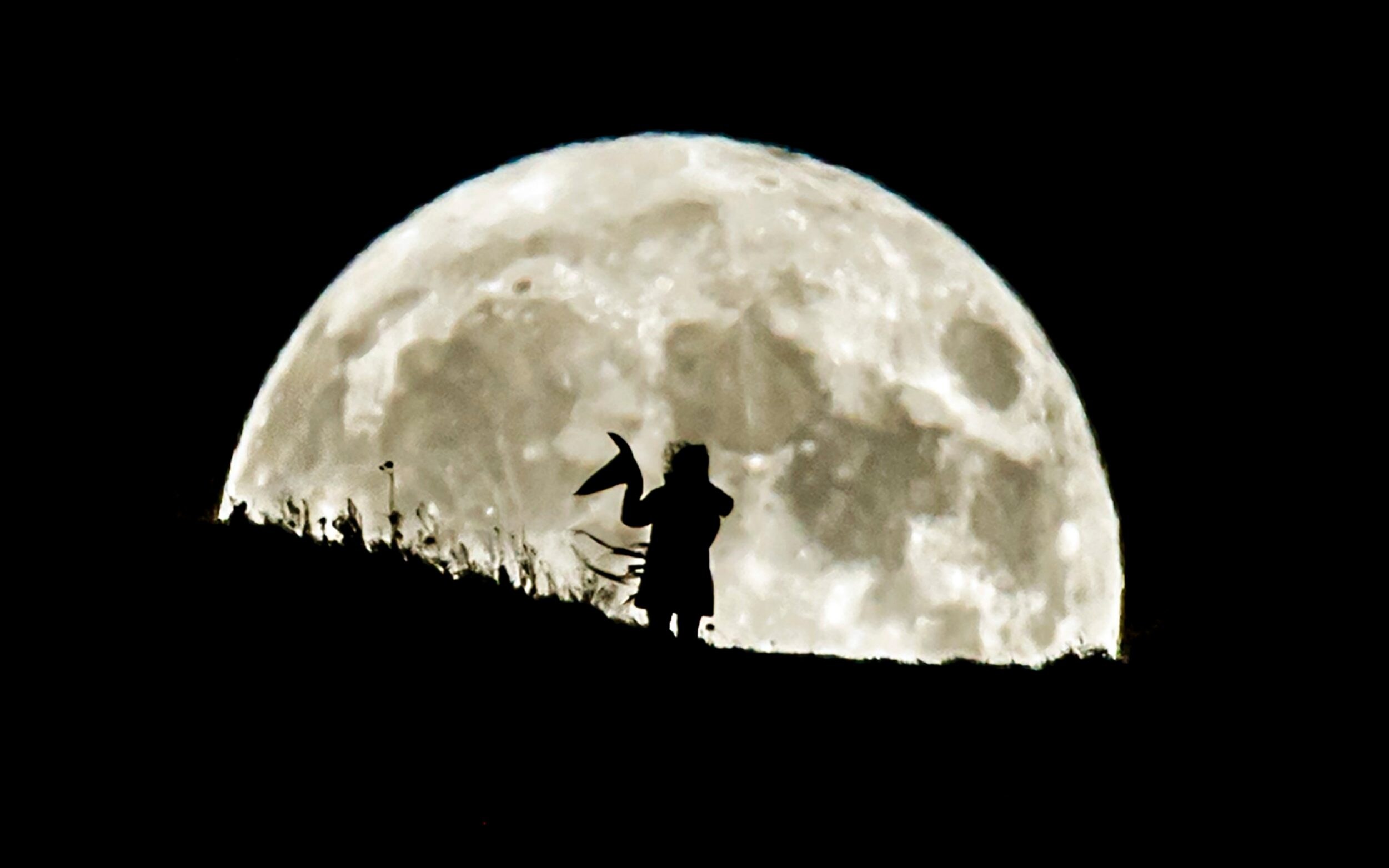 This year, space fans may have seen July’s full moon turn a shade darker than usual, as the third penumbral lunar eclipse of 2020 took place.

Tribes in North America typically caught Sturgeon around this time, but it is also when grain and corn were gathered so is sometimes referred to as Grain Moon.

This full moon appears in the same month as the Perseid meteor shower, which peaks on August 12 and 13.

This year, a black moon (the third new moon in a season of four new moons), will also take place on August 19. However, we won’t be able to see this lunar event as new moons are invisible to the naked eye.

It was during September that most of the crops were harvested ahead of the autumn and this full moon would give light to farmers so they could carry on working longer in the evening. As a result, it is most commonly known as the Harvest Moon, with some tribes also calling it the Full Corn Moon, Barley Moon or Fruit Moon.

However, the Harvest Moon is the name given to the first full moon that takes place closest to the Autumn Equinox. While the Harvest Moon usually falls in September, around every three years the timings of the astronomical seasons lead to it falling in October instead.

In 2020, the Autumn Equinox falls on September 22, with the closest full moon falling in October. Therefore, September’s full moon was known as the Full Corn Moon, while the first of two full moons in October was the Harvest Moon.

When? September 2 and October 1

As people planned ahead for the cold months ahead, October’s full moon came to signify the ideal time for hunting game, which were becoming fatter from eating falling grains. This full moon is also known as the Travel Moon and the Dying Grass Moon.

In 2020, the Hunter’s Moon was also a blue moon, because it was the second of two full moons to occur in October.

A total lunar eclipse, otherwise known as a ‘blood moon’, occurs when the Moon moves into the Earth’s shadow. At the distance of the Moon, this shadow appears like the bull’s eye at the centre of a dartboard.

The umbral shadow slowly creeps across the Moon’s disc until it engulfs it completely. You might think the Moon would disappear from view at this point but this is typically not the case. The Earth’s atmosphere acts like a lens, refracting or bending the Sun’s red light to infill the otherwise dark umbra. This results in the Moon’s usual bright white hue transforming into a deep blood orange.

Space fans will remember that the last total lunar eclipse graced our skies on January 21, 2019. In total the celestial spectacle – which was also a full moon and a supermoon – lasted five hours, 11 minutes and 33 seconds, with its maximum totality peaking at 5:12am.

While the next total lunar eclipse is not set to take place in the UK until May 16, 2022, three prenumbral lunar eclipses occurred this year on January 10, June 5 and July 5.

This type of eclipse takes place when the Moon moves through the outer part of the Earth’s shadow, also known as the penumbra, causing a slight darkening of the lunar surface. Therefore, it is easily mistaken for a normal full moon and unlike a total lunar eclipse, it can be difficult to notice or observe.

Once in a blue moon

Does this well-known phrase have anything to do with the Moon? Well, yes it does. We use it to refer to something happening very rarely and a blue moon is a rare occurrence.

A monthly blue moon is the name given to a second full moon that occurs in a single calendar month and this typically occurs only once every two to three years. In 2020, the Hunter’s Moon on October 31 will also be a blue moon because it is the second full moon to occur in October.

There’s lots of other moons, too – how many do you know?

Full moon: We all know what these are. They come around every month and light up the sky at night.

New moon: Sometimes known as the invisible phase, as it generally can’t be seen in the sky. It’s when the Sun and Moon are aligned, with the Sun and Earth on opposite sides of the Moon. As a result, the side of the Moon that faces the Earth is left in complete darkness.

Black moon: Most experts agree that this refers to the second new moon in a calendar month, while some use the term to describe the third new moon in a season of four new moons. The last black moon took place on August 19, 2020.

Blood moon: Also known as a total lunar eclipse. It’s when the shadow of Earth casts a reddish glow on the moon, the result of a rare combination of an eclipse with the closest full moon of the year.  There was one in the UK in January 2019, with the next one set to be visible over South America, North America and parts of Europe and Africa on May 16, 2022. Space fans in the UK won’t be able to see every phase of this eclipse, but should be able to see it at totality when the Moon appears with a reddish-orange glow.

What is a supermoon?

Ever looked up at the night sky to see a full moon so close you could almost touch it? Well you’ve probably spotted a supermoon.

The impressive sight happens when a full moon is at the point in its orbit that brings it closest to Earth. To us Earth-lings, it appears up to 30 per cent brighter and 14 per cent bigger.