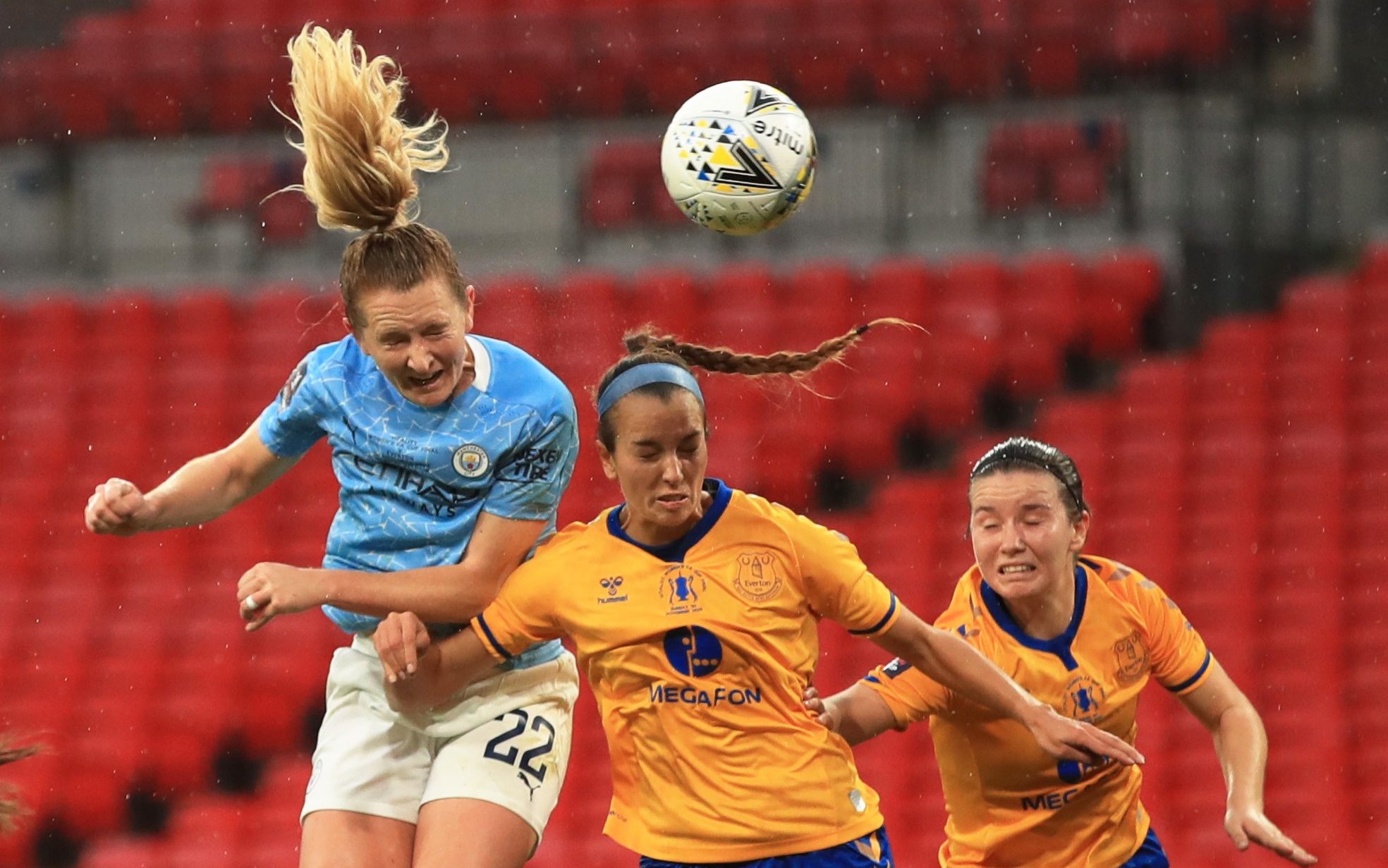 The Toffees boasted a back line that has conceded only five times in eight games across all competitions heading into this encounter and it was once again resilient here for almost the entirety of the first half. But they switched off when Sam Mewis, one of the tallest outfield players in the women’s game, used every inch of her six foot frame to power home Alex Greenwood’s corner. Seldom did City send a high cross into the area when flooding forward, with Gareth Taylor’s side preferring to work the ball up the right flank and down the middle with fizzing, intricate passes. Greenwood’s corner – City’s first attacking set-piece of the game – caught a well-drilled back four off guard.

Lucy Bronze edged it in the battle with Hayley Raso

It took half a century, but Raso made history as the first Australian to feature in a women’s FA Cup final at Wembley. The 27-year-old has spearheaded large swathes of Everton’s attack this season along with marquee summer signing Valerie Gauvin, but struggled to assert herself against her opposite number in attack. She and Bronze traded yellow cards in the first half, clattering into each other in separate 50-50 challenges and it was not surprising that after the break Raso drifted over to the other flank where she fared better, proving a menace for Greenwood and Stokes. On balance, though, her usual attacking threat was nullified and Willie Kirk replaced her with England youth international Chantelle Boye-Hlorkah in the 75th minute.

Everton too often a victim of City’s clinical high press

City dominated in the first half, flooding forward with confidence. In a testament to Everton’s watertight defence, the cup holders could only engineer a handful of chances in open play, despite City’s all-English back four of Steph Houghton, Demi Stokes, Greenwood and Bronze looking like a de facto midfield, so high were they camped up the pitch. When the Toffees did halt a sky blue attack, they struggled to replicate the fluency with which City showed in attack. They were, however, more intuitive after the break and orchestrated a golden move when star Danish midfielder Rike Sevecke picked out Gauvin, whose thumping header should have put her side in front at 1-1.

Did the occasion get to Everton? It looked that way in extra time. This was City’s third time gracing the Wembley turf for an FA cup final in four years. By contrast, this was Everton’s first cup final in six seasons and for large periods Gareth Taylor’s side looked at home in a hollow national stadium that has become almost like a second home in recent times but squandered a host of chances in the last play of normal time. City rallied when they conceded Gauvin’s sucker punch against the run of play, and while it was a perfectly weighted ball from 19-year-old Jess Park which engineered City’s second, cool heads ultimately proved the difference.