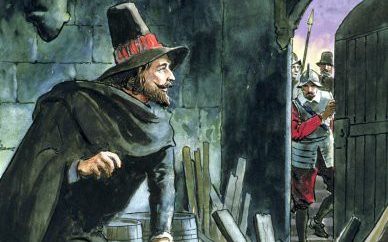 The traditional death for traitors in 17th-century England was to be hanged, drawn and quartered in public. But this proved not to be the 35-year-old Fawkes’ fate.

As he awaited his punishment on the gallows, Fawkes leapt off the platform to avoid having his testicles cut off, his stomach opened and his guts spilled out before his eyes.

Mercifully for him, he died from a broken neck but his body was subsequently quartered, and his remains were sent to “the four corners of the kingdom” as a warning to others.

Following the failed plot, Parliament declared November 5th a national day of thanksgiving, and the first celebration of it took place in 1606.

King James I also sought to control non-conforming English Catholics in England. In May 1606, Parliament passed ‘The Popish Recusants Act’ which required any citizen to take an oath of allegiance denying the Pope’s authority over the king.

Observance of the 5th November Act, passed within months of the plot, made church attendance compulsory on that day and by the late 17th Century, the day had gained a reputation for riotousness and disorder and anti-Catholicism. William of Orange’s birthday (November 4th) was also conveniently close.

The actions of Guy Fawkes are immortalised in the nursery rhyme ‘Remember, remember’. Although several different versions exist, the first five lines remain to same in all.

Remember, remember, the fifth of November Gunpowder treason and plot

We see no reason

Why Gunpowder treason Should ever be forgot ….

To blow up king and parliament.

Three score barrels were laid below

By god’s mercy he was catch’d

With a darkened lantern and burning match.

God save the king.

And what shall we do with him?

A penn’orth of cheese to choke him,

A pint of beer to wash it down,

And a jolly good fire to burn him.

The Houses of Parliament are still searched by the Yeomen of the Guard before the state opening. The idea is to ensure no modern-day Guy Fawkes is hiding in the cellars with a bomb, although it is more ceremonial than serious. And they do it with lanterns.

The cellar that Fawkes tried to blow up no longer exists. In 1834 it was destroyed in a fire which devastated the medieval Houses of Parliament. The lantern Guy Fawkes carried in 1605 is in the Ashmolean Museum, Oxford.

Guy Fawkes Day is celebrated in the UK, and in a number of countries that were formerly part of the British Empire, with fireworks, bonfires and parades. Straw dummies representing Fawkes are tossed on the bonfire, as well as those of contemporary political figures.

Dummies have been burned on bonfires since as long ago as the 13th century, initially to drive away evil spirits. Following the Gunpowder Plot, the focus of the sacrifices switched to Guy Fawkes’ treason.

Traditionally, these effigies called ‘guys’, are carried through the streets in the days leading up to Guy Fawkes Day and children ask passers-by for “a penny for the guy.” Today the word ‘guy’ is a synonym for ‘a man’ but originally it was a term for a “repulsive, ugly person” in reference to Fawkes.

The fireworks represent the explosives that were never used by the plotters.

In Ottery St Mary, south Devon, in a tradition dating from the 17th century, barrels soaked in tar are set alight and carried aloft through parts of the town by residents. Only Ottregians – those born in the town, or who have lived there for most of their lives – may carry a barrel.

Lewes, in southeastern England, is also the site of annual celebration. Guy Fawkes Day there has a distinctly local flavour, involving six bonfire societies whose memberships are grounded in family history stretching back for generations.

The only place in the UK that does not celebrate Guy Fawkes Night is his former school St. Peter’s in York. They refuse to burn a guy out of respect for one of their own.

The origins: fireworks and bonfires

During the 10th century a Chinese cook discovered how to make explosive black powder when he accidentally mixed three kitchen ingredients – potassium nitrate or saltpetre (a salt substitute used in the curing of meat), sulphur and charcoal.

The cook noticed that if the concoction was burned when enclosed in the hollow of a bamboo shoot, there was a tremendous explosion.

Fireworks arrived in Europe in the 14th century and were first produced by the Italians. The first recorded display was in Florence and the first recorded fireworks in England were at the wedding of King Henry VII in 1486.

The word ‘bonfire’ is said to derive from ‘bone-fire’, from a time when the corpses of witches, heretics and other nonconformists were burned on a pyre instead of being buried in consecrated ground.

Fireworks should be enjoyed at a safe distance and adults should deal with firework displays and the lighting of fireworks. They should also take care of the safe disposal of fireworks once they have been used.

November 5th has become an important date globally now that political activists all over the world are wearing Guy Fawkes masks to protect their identity. These masks were inspired by Alan Moore’s dystopian ‘V for Vendetta’, the 1988 graphic novel whose main character is loosely based on Guy Fawkes.

In recent years, supporters of anti-Capitalist group Anonymous have taken to the streets in cities and towns worldwide in the so-called ‘Million Mask March’ against political oppression.

Is Bonfire Night cancelled this year?

Unfortunately, many of this year’s celebrations and traditions may not be able to go ahead as planned due to the Covid-19 pandemic.

Some councils have already cancelled public events, while other areas are exploring alternatives such as drive-in firework displays.

The traditional cake eaten on Bonfire Night is Parkin Cake, a sticky cake containing a mix of oatmeal, treacle, syrup and ginger.