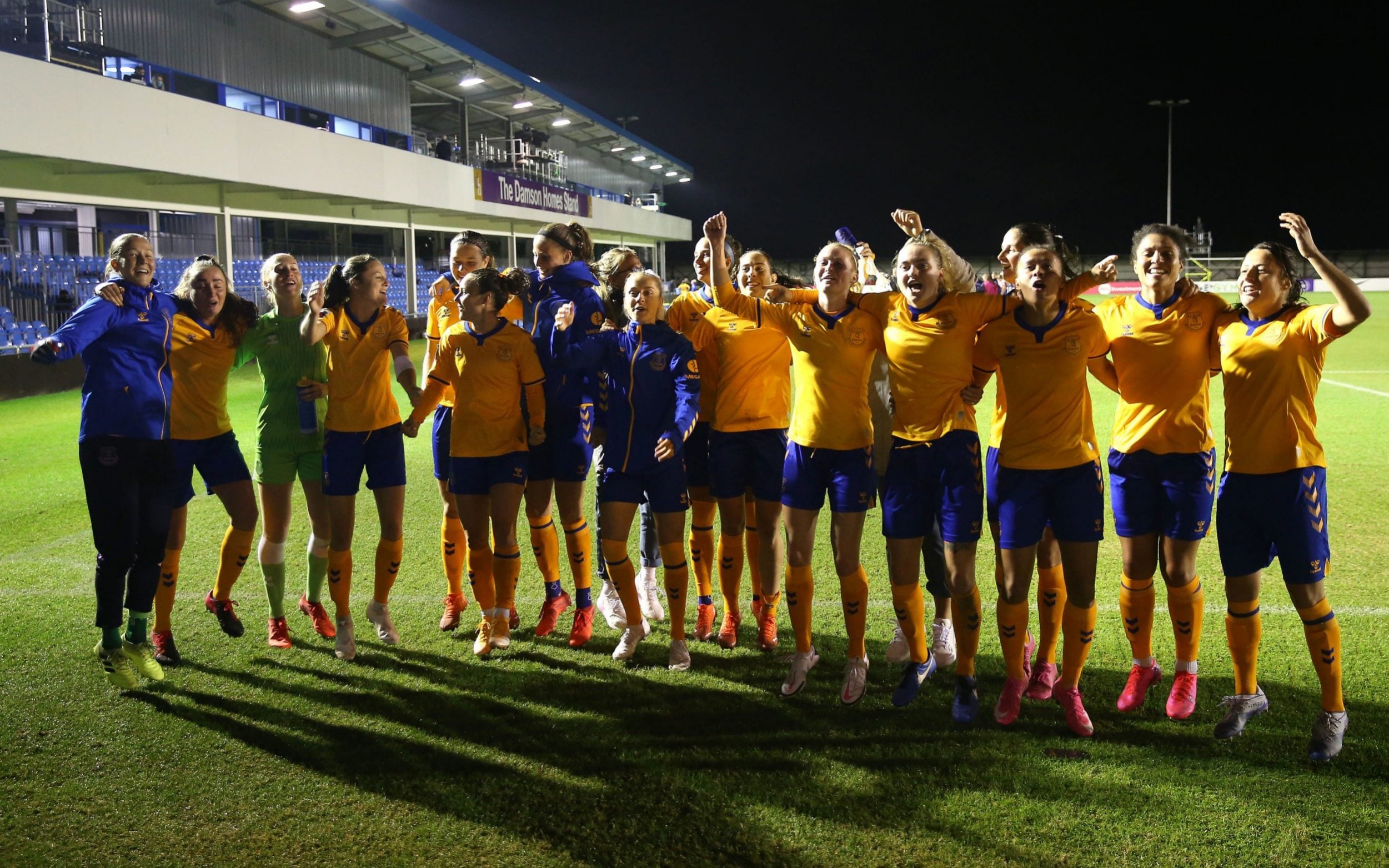 Two years ago, Everton sunk to the bottom of the Women’s Super League after losing to Yeovil Town, a club now in the National League.

Now, manager Willie Kirk is allowing himself to look three games ahead, to consider a scenario where his team could be above reigning champions, Chelsea, when they play them in a month’s time.

“If we can win both of these next two games, which we’re more than capable of doing, we’ll be going to Chelsea on Nov 8 at least two points ahead of them,” Kirk says of his WSL joint leaders. “They’ve got a tough one this weekend against Manchester City, so we could be more than two points ahead of them, and Chelsea will know that we beat them in our last game. So it puts a lot of pressure on them …”

He catches himself: “But yeah, we cannot look too far ahead, we need to just make sure we approach every game as an individual game to give us those opportunities in the future.” He can be forgiven looking ahead, though, after a staggering start to the season from his much-improved side since their mid-table finish in 2019-20. On Sunday at West Ham, Everton will look to win their fourth successive WSL game for the first time since August 2011.

Kirk’s side have five wins from six in all competitions, and eight of his players have scored.

The club have not won any silverware since the FA Cup in 2010, and they lost to Manchester City on Wednesday, but Kirk has made no secret of his lofty ambitions for the side he took over late in 2018, after that Yeovil loss. Just over a week ago, they booked their place at Wembley for the delayed FA Cup final, and on their way recorded an emphatic 2-1 victory over Chelsea. There is no complicated formula the club have concocted to help Kirk’s ambitions, they have simply invested more in their women’s team. Everton women now has a “strategic leadership team”, which includes the first sporting director. Add to that, more money for Kirk to recruit, in plans he had been masterminding for months, and you have a whole host of stellar additions to his roster.

Scotland winger Claire Emslie, Ingrid Moe Wold of Norway and France forward Valerie Gauvin, who reportedly cost six-figures, are already slotting in nicely. Signings from earlier this year, Australia’s Hayley Raso and Sandy MacIver, are finally getting the game time the Covid-19 pause took from them. England’s Izzy Christiansen is another, and Kirk recognises her as the jewel in this team’s crown, the game-changer in midfield who is helping orchestrate this run of form.

“Massive impact, massive player, massive personality,” Kirk says. “When I look back on the 22 months and little moments you think can make big differences – like winning your first game against Liverpool, winning at Anfield, beating Chelsea will be one – Izzy’s signing is certainly going to be one of those. She has such high standards, and that is our minimum now – what Izzy sets on a daily basis.”

Raso said the secret to the team’s success was Kirk helping foster “a lot of belief” at the team’s Finch Farm base. She said the significance of their win over Chelsea two weeks ago was a measure of that: “We went out there and made a statement. I think going in as underdogs, we had nothing to lose. There was a lot of talk about what Everton can do this season and I think we proved that we were really gunning for it.”

Kirk insists he does not use that underdog line as a motivator though, and that the aim is to change talk of a big three in the WSL to a big four: “What I’ve said to the players is we want to change public perceptions of us. We want people to talk about us as a top club and I don’t think they do just now. And rightly so, we’ve had one big result against the top three and that doesn’t make us a top team overnight. Certainly, it was a big step in the right direction.

“But if anybody thinks we’re a flash in the pan, I would certainly use that as a motivator for the players. If there are doubters out there, hopefully we’ll continue to prove them wrong.”